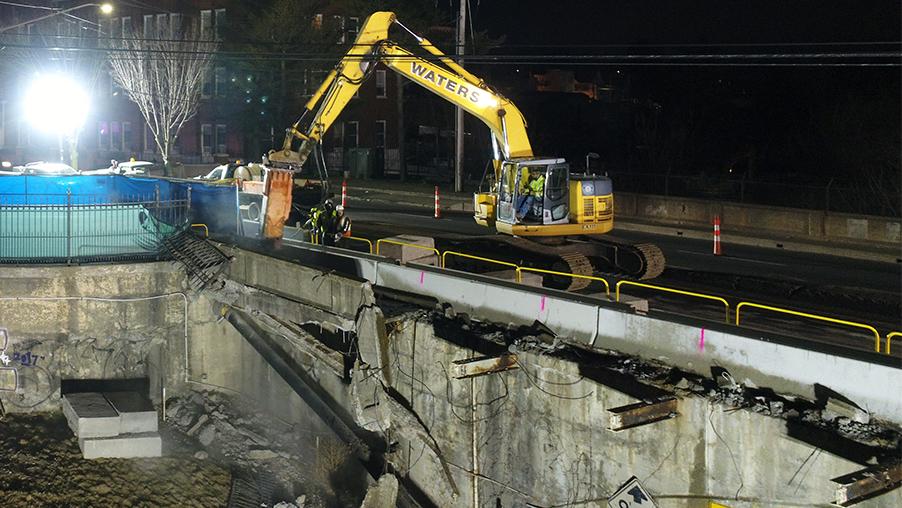 AI Engineers, Inc. (AI) provided Unmanned Aerial Systems (UAS) services for this emergency sidewalk demolition on Bridge #000325, US Route 1 over Stillman Pond in Bridgeport, CT. The intent of the operation was to provide a safe option for the Contractor to observe demolition activities and modify their procedures as necessary.

An Emergency Declaration was issued by CTDOT’s Commissioner due to the extremely poor condition of the cantilevered sidewalk. It was decided that the sidewalk should be removed because of these safety concerns. Due to legal matters that restricted access to the project site, work could only be performed from the bridge deck. This limited the Contractor’s ability to see the demolition activities below deck.

AI deployed a DJI Phantom 4 Pro UAS equipped with a 20-megapixel, high-resolution photograph and 4K high-definition video camera. The live video feed was transmitted to an iPad in the cab of the contractor’s equipment allowing the demolition work to be safely viewed and efficiently performed.

An FAA Certificate of Waiver or Authorization was issued to operate in Class D airspace where the bridge is located. Provisions of this waiver allowed for operations after civil twilight. Through this permitting effort, AI established several direct connections with Federal Aviation Authority (FAA) personnel in Washington, DC, who now serve as trusted advisors and aid AI in acquiring waivers and authorizations. In addition, coordination with local and federal authorities was necessary.